Dirt! to be shown in September 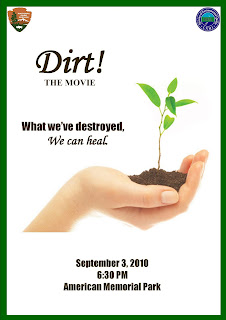 Coming up in September we have a great documentary, Dirt! the movie, that discusses our reliance on the Earth's soil and the damage we have wrought on it.  The film will be shown at the American Memorial Park Visitor's center at 6:30pm on September 3rd (previous viewers note the new time!).

Official selection to the 2009 Sundance film festival, and winner of several awards (including Best Documentary at the Maui and "Visions/Voices" film festivals), Dirt! tells the story of Earth's most valuable and under appreciated resource, from its miraculous beginning to its crippling degradation.  The movie seeks to revolutionize the way we see dirt and raise awareness to the plight of one of our most important resources.  Rather than simply bemoan the situation, Dirt! offers a myriad of actions that we can take as communities to promote the rebuilding of soil and the sustainable use of it, reminding us that "What we have destroyed, we can heal".


"An invogorating look at an invaluable substance we take for granted."
- LA Times

"...an uplifting story about people from all walks of life who are striving to renew our relationship with the ground beneath our feet"
- The Hollywood Reporter

You can see the trailer and find more information about the film here.


Please join us for this wonderful film on September 3rd.  As always it's Free!
Posted by Aric Bickel at 1:34 PM