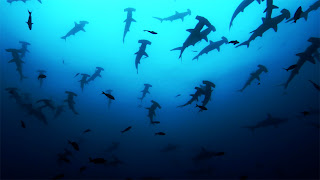 In anticipation of the legislature's vote on a shark-fining ban in the CNMI (details here), KSPN will be screening the film Sharkwater at 6:30pm this Thursday (Jan. 6th).  Regular attendees of the First Friday Film program will remember that we screened this film in August of last year to an over-capacity crowd at AMP.

Last night, KSPN ran a piece as part of their evening news about the shark bill, that featured an interview with the director of the film, Rob Stewart (the entire program can be viewed here).  During the interview, Stewart reaffirmed his intentions to visit the CNMI later this month in response to efforts of Kathy Pagapular and her San Vicente 3rd grade class, who wrote to Stewart about their dedication to shark conservation following the viewing of his film (more details here).

Please help us in spreading the word about this television event.  You can view the trailer for the film by clicking on the banner below, and you can read our press release on the film here.

KSPN will be running stories on the evening news related to the screening of the film and progress of the fining bill all week, so stay tuned!