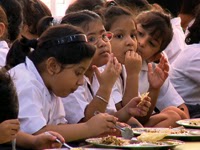 First Friday Films presents a new film from the Future Food series this Friday, May 1st at 6:30pm at American Memorial Park. This episode is called “Fat or Skinny” and looks at the lives of people in India as they are faced with the choice between Western-style fast food and healthy indigenous food options.

Every day, as India awakes, 1.2 billion people need to be fed. By 2050 it could be 1.7 billion. Half a billion small scale farmers supply most of India's food. Traditionally, Indians have eaten the healthy cuisine of India's 29 states, but as people move to the cities there's a growing demand for fast processed food, the so-called 'junk food' accused of causing obesity and chronic health problems. Now India is a country on the edge of two possible futures: a future that's well fed and healthy; or a future with Western diets and Western obesity.

Before the film, Patricia Coleman, Nutrition and Health Program Leader from NMC-CREES will speak about her ongoing partnerships in the CNMI that are aiming to promote healthy food choices and healthy lifestyles within the community. Her work includes nutrition education, childhood overweight and obesity research, and studying the built and food environments in the CNMI and the region. NMC-CREES recently received the “Best Practice” in Health Award by the World Health Organization – Western Pacific Region.


First Friday Films is a partnership between American Memorial Park, the Bureau of Environmental and Coastal Quality and the Humanities Council with support from other organizations and individuals. This particular film is sponsored by BECQ. As always, our film events are free and open to the public. This event will run approximately 60 minutes.
Posted by Kaity Mattos at 2:23 PM