There Once was an Island for February 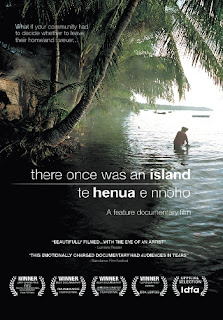 First Friday Films will be featuring a powerful new film for the month of February, There Once Was an Island: Te Henua e Nnoho by New Zealand director, Briar March. Showtime will be on February 3, 2012, 6:30pm at the American Memorial Parks Visitors Center.

This award winning, feature documentary is not to be missed. The film follows three people from Takuu atoll in the Solomon Islands as their community experiences the devastating effects of climate change firsthand. Will they decide to stay with their damaged and sinking island home or move to a new and unfamiliar land, leaving their culture and language behind forever?
First Friday Films is a monthly film series brought to you through a partnership with the National Park Service and the Division of Environmental Quality (DEQ), with generous support from community groups and organizations such as the NMI Council For Hummanities which is sponsoring this film.
For planning purposes, the movie runs about 80 minutes long. As always, First Friday Films is free and open to the public.
Posted by Aric Bickel at 2:55 PM