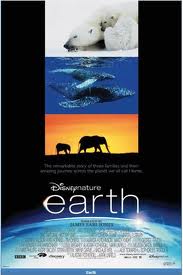 Join First Friday Films tomorrow for a journey around the planet from the perspective of nature’s most mysterious and elusive animals. Disneynature’s Earth will be screened Friday at 6:30 p.m. at the American Memorial Park Visitor’s Center as part of this monthly event.
The animated feature “The Man Who Planted Trees,” which was scheduled to play this month will be rescheduled to the April 1st event due to some logistical delays.
Audiences tomorrow will not be disappointed, however, by  Disneynature’s “Earth”, which takes the viewer into the personal family lives of three of the world’s most carismatic and elusive animals; the Polar bear, Elephant, and Humpback whale.  Filled with adventure and suspense, the film ventures into the realm of these wild animals and the spectacular world in which they exist.  Created with rare footage and remarkable scenes, it is an inspiring film for all ages.

The Pacific Historic Parks (formerly the Arizona Memorial Museum Association) Bookstore, located inside the visitor’s center, will be open until 8:30 p.m. All proceeds go to community education programs.

As always, First Friday Films is free and open to the public.  For planning purposes, the movie runs about 90 minutes long.
Posted by Aric Bickel at 11:45 AM